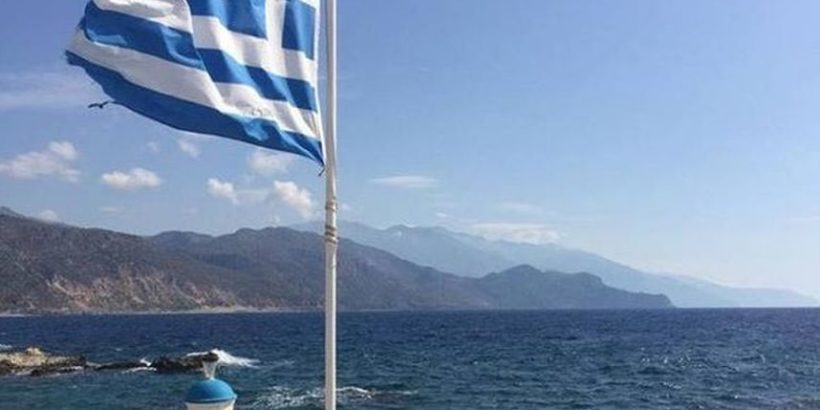 Good source: The book „Paleochora (a review)“, by Nikolaos Pyrovolakis.

Since the Venetian period, the area of ​​today’s Paleochora is called “Selino Kastelli ”- the reason is the Venetian castle overseeing the city. Priorly called “Orima” (= „lying in the mountains“) this whole area was named after the fort, Selino.

A nice book. Only available in the Paleochora bookstore.

In 1834, the English traveler Robert Pashley* visited the Venetian fortress and reported he only came across ruins and the place was completely uninhabited. There was only one building (a warehouse) storing cereals coming mainly from Chania. The grain served for the inhabitants of Selino and Sfakia. He describes about his trip: “After we had left Selino Kastelli at a quarter past nine, we crossed the river half a mile to the east.  The ground was covered with shards of clay all over indicating the prior existence of an ancient city.“

Also a variety of ancient coins fround by a plowing farmer gives evidens about the prior residents of Paleochora.  The traveler Paul Faure* assumes that the village was most likely built on the ruins of the ancient city of Kalamidi.

Since it was set up near an old, crumbling city, the place was given the name Paloechora (Old Place). Now, keep on thinking which of those 40 cities Plinius was writing about it might have been.

There are various interpretations:

1.) The book „Stationen“ of an unknown Cretan traveler states that the ancient city of Kalamidi was west of Lissos and 30 stadiums (1 stadium = 185.2m) away from the front end of „Krio (rock tongue at the end of today’s Koundouras) and the mouth of the river Strato still flowing through Vlithias.

Pashley gets more specific and writes verbatim: „So if we assume that there is an ancient site here, then we could assume it was Kalamidi.”

2.) The fragments of the clay shards, the coins and the finds in general made at a distance of about ?00m northeast of today’s Paleochora could also be one of the remains of a Venetian „Borgo“ (= a small quarter of the village), which laid outside of the castle walls.

When studying the local history, it quickly turns out that the exact location of the ancient city of Kalamidi is doubntful. Some believe it to be north of the village of Agia Trianda, in „Furnika“, where tombs hewn out of rocks have been found together with old walls about 300 paces further on. However, looking at the surrounding area, it becomes clear that the soil quality together with the too small and too infertile acreage and the shortage of water does not speak for the existence of a blooming city.

An elderly resident once claimed that water scarcity was always a problem and that he when plowing found a very old water pipe system. So, people tried to get water into the village which lies on the remains of the old city. Still, the opinion of historians and foreign travelers like Faure Paul and Pashley prevail indicating that the city of Kalamidi was near the sea and as previously mentioned, had been located northeast of Paleochora and near a flat river landscape.

Nikos‘ book is only available in the Paleochora bookshop. So, quickly get one.

* Paul Faure (*1916 in Paris, † July 13, 2007) was a French archaeologist and antiquarian bookseller. He was a professor at Blaise Pascal University of Clermont-Ferrand and held an honorary doctorate from the University of Athens in Greece. He spent decades researching Crete, especially its Minoan period. He also published books on Greek topics, as well biographies of Alexander the Great and about the archaeologist Heinrich Schliemann.

* Robert Pashley (September 4, 1805, † May 29, 1859) was an English traveler and 19th century economist. Pashley was born in York and studied at the Trinity College in Cambridge. Awarded in mathematics and classical music, he was elected in the first meeting in 1830 as a Fellow of Trinity. In 1832, he graduated with an MA and traveled to Italy, Greece, Asia Minor and Crete, from where he started to publish his two-volume “Journeys in Crete” report.