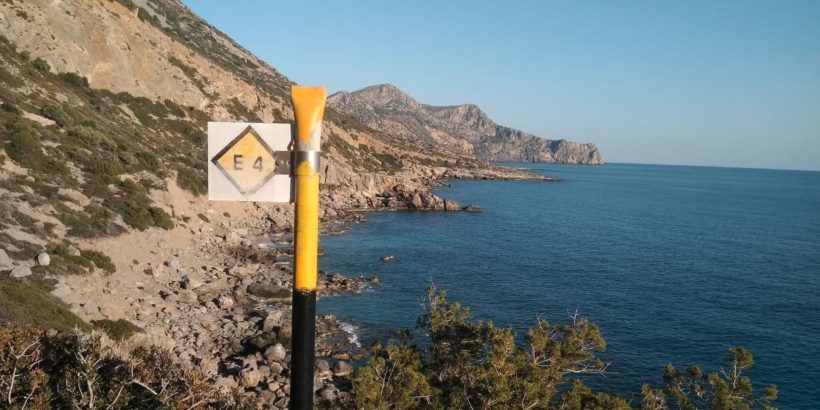 The European long-distance path E4 leads all the way down to Crete. At Paleochóra, it reaches beach paradises and an enchanting mountain wilderness. The Pirate Bay of Gramvóussa is a little out of the way, but postcards of it are available at every kiosk in Crete.

If it wasn’t for the dry vegetation, it would be the perfect surroundings for a South Sea Love Story. In the evening, once the excursion boats left, you are alone. Islands lie like scattered table mountains in front of the bay while is sun is setting leaving mountains, sea, grass and dunes shimmering in a magic pink. The water in the shallow lagoon lures you in with warm thirty degrees.

On the way south, the four hundred year old village of Milia is worth a detour (book tip: Milia – the forgotten village). The hamlet is hiding in the mountains between oaks and chestnuts. Nested terraces, stone walls and stairs have been authentically rebuilt, the apartments comfortably and lovingly decorated.

Solar electricity provides light, the open fireplaces cozy warmth. In the rustic tavern, the tables are loaded with local specialties such as yoghurt, cheese, eggs and meat, jam or honey.

Where Sorbas is still alive

Our section of the E4 leads goes the dune landscape at Elafonisi on the west coast to the Samaria gorge on the south coast. With its 18 kilometers this is the longest canyon in Europe. Hiking the Samaria can be done in four steps, it is like a star-hike all starting from Paleochora, managed with the help of boat trafficking and can easily be part of your beach holiday.

An hour of transit over the mountains has kept mass tourism away, so the place was keeping its traditional character. In the open air theatre of Paleochora, every summer the classic movie of “Alexis Sorbas” was played, with a pause in the middle of the film to allow time for switching the celluloid. It cannot get more original.

The whole world knows Sorbas, but they do not know Paleóchora. Luckily.

Low houses and narrow streets, idyllic balconies and oleanders cover the island. Families with young children love the quiet, gently sloping sandy beach close to the city, and enjoy the shades of Filao trees while appreciating the humane prices. Until October, the Libyan Sea remains warm and the sand gets really hot. The Jetée Beach Bar with their creamy, thick yogurts with chestnut honey and fruit stops every desire for adventure, if there were not the numerous bays which are easily accessible by bike.

From the terrace of the Castello Bar at the Venetian fortress, we wish the sun a “Kalispera” – Good Evening – while the taverns in the harbor are spreading their odors.

Choosing the food is a deliberate ritual. After all, the family honor is at stake, if the guest is not satisfied. Fresh fish right at the sea shore is a wonderful dish – and if there is the slightest concern about freshness, you are asked into the kitchen and “your” fish with its pink gills is personally introduced you. The Cretan cuisine is rich in vegetables, even the prices are vegan, and the free Raki afterwards anyway.

A tour boat goes from Paleóchora to Elafonisi.

The lagoon’s sand is the most tender temptation for the feet you can think of. From here, the first part of our hike goes south. Far away from streets, a dream bay follows with dense shadows of weather-torn pine trees waiting for you. Then the path ends in rubbles and the shadows disappear.

In front of a whitewashed chapel, an old bell hangs between laurel trees, decorated with a relief of St. John. The tourist map has many white spots here, including the silent chapels with their scents of wax and incense burning for the icons.  Oleander grows all the way down to the sea. The water spring, though,  which is indicated on the map remains undetectable. At the last pass on the west coast, the water you carried is mostly used up and the tavern from Krios Beach waves a hello.

The landscape turns green again along the south coast. The second path stage leads to Gialiskari Bay, where a red canteen truck invites for a rest. Its bamboo roof extends into a rustic tavern.

The back side of this ramshackle vehicle is covered with a screen showing an irritatingly real landscape painting. Another design shows colorful beverage crates, kinked parasols and a homemade chocolate cake not inferior to a Sachertorte.

Further behind at Lollos Kantina between rocks a hut made of palm fronds watches over the beach. Sarah cuts brisk hairstyles, massages and tells interesting facts about the olive oil. Olive trees are still manually picked and the Tsounati olives, typical to western Crete, are pressed at a maximum of 24 degrees.

Goat in the mountains.

A bath in the idyllic Bay of Cape Plakes, sand on your skin, nets made of glass-green light reflections, the smell of sweat and sea, and then walking over the rubbles of the Trachili slope to the plateau, carefully, because a slip into arid thorny shrubs ends unpleasantly. The fertile but uninhabited valley of Lissos lies steeply behind the breakline.

The Asklepios temple with its beautiful mosaic is a reminiscent of the Roman leper colony. For thousands of years a water spring has been splashing under carob trees. In Crete, their ribbed and twisted pods were used as chocolate substitutes.

The path climbs up again. Between the red earth and the blue sky, the peaks of Levka Ori, the „White Mountains“, are approaching. They rise to a height of 2450 meters at only a short distance from the sea. The path goes along gigantic overhanging rocks and a grove with spring-green, fragrant Aleppo pines in every season. Then the port of Sougia appears, where the ferry to Paleóchora is waiting.

The third part of the path begins in Sougia. The mountains fall down to the coast with steep slopes and cliffs. A mule track leads into deep gorges. The E4 signs are less. Full-grown ravens circle in the sky, the goat carcass next to the path seems to be a rest of their meal.

The silence is broken by a far conversation between two fishermen from the sea. Timelessness fills the shadows of a laurel and pine forest, warmth and astonishing peace all around. An ancient pillar at Cape Tripiti, hundreds of meters above the sea, interrupts the restless cycle of  „create tools, save time“.

What is younger than the gods of Greece flakes off like rotten plaster. Here, at the latest, the hiker has to turn back if he does not want to camp outdoors or descend to Tripiti Beach for being picked up by Captain George and his motorboat.

The ship takes us to the last, fourth part of our trip. The way on the steep side of Levka Ori is partially eroded, it requires sure-footedness and a good orientation.

Oure destination, the 1,800 meter deep Samaria Gorge, is also approached by ferry. The hike through this national park is the most spectacular and most frequented in Crete, and does not scare with difficulties. The majority of hikers start on the plateau of Omalos and then walk downhill. Those who start at the seaside will find it a calmer hike, but will have to turn back after two thirds of the distance in order to catch the boat. The return journey is enjoyed with some glasses of wine and joyous singing.

Mind, there is a Cretan saying:  those who can sing should not waste their time chattering.