Many visitors to South (-west) Crete know them at least by sight – the island of Gavdos, which together with its smaller sister island Gavdopoula is located about 36 km south of Crete and is therefore the southernmost island in Europe.

The shortest distance to the North African coast is 260 kilometers. The island measures about 9 km in north-south extent, about 5 km from east to west, its area covers about 30 km². Rocks up to 368 m high and low coniferous forests dominate the landscape. On the coasts there are some fabulous beautiful sandy beaches. Together with its uninhabited smaller sister island Gavdopoula, Gavdos in inhabited by the southernmost Greek community. 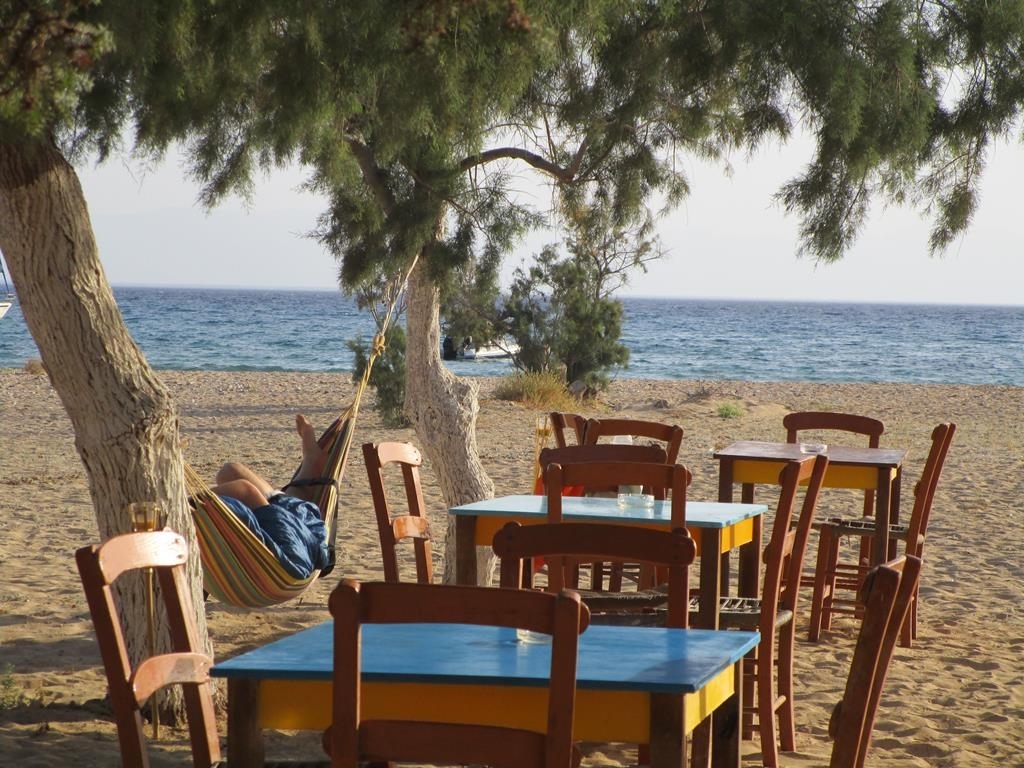 Gavdos and Gavdopoula are an important rest place for migratory birds on their way from or to Africa. Over 120 species have been registered on Gavdopoula. In the basins formed by the source of the river Agios Georgios, even turtles were spotted.

From Paleochora, Gavdos and Gavdopoula can be seen razor-sharp mostly on bad weather days – under good weather conditions they often disappear into the haze.

An island with a long history in antiquity, Gavdos was seen as the island „Ogygia“ (Ὠγυγία), on which the seductive nymph Kalypso is said to have held the legendary seafarer Odysseus and his companions with her love charm for seven years. It is believed that the island was important in ancient times, e.g. remains of a Greek port city were discovered at Lavraka’s. Up to 8,000 people are said to have lived on Gavdos since the island was an important stop in shipping traffic to the east and to Africa. The importance continued even during the Byzantine period – after all, Gavdos was one of the 22 dioceses of Crete and provided three bishops and an archbishop.

The Arab pirates under Abu Hafs Omar (824 AD) brought a sudden end to the blossom, after which the island was initially forgotten. Turkish rule over Gavdos lasted from 1665 to 1895, during this period the population decreased to around 500 inhabitants in 1882. The Saracens also interfered in the fortunes of the island, the name of the beach „Sarakiniko“ suggests a Saracen shelter. In the 1930s (under Metaxas’ dictatorship) the island was used as an exile for numerous communists, at times more than 250 people were housed on Gavdos, including leading figures of the Greek communist movement such as Markos Vafiadis.

During the Second World War Gavdos (like Crete) was occupied by German troops, the old lighthouse near Ambelos was bombed by Stukas in 1941. The rural exodus, which began in other parts of Greece in the 1960s, started on Gavdos already in the 1950s: Gavdiotes exchanged their land on the island against former Turkish land in Crete after it was nationalized there. In Crete, communities of former Gavdiotes – Gavdiotika – emerged, for example, in the Gavdos district in Paleochora.

The name of the island

Gavdos was known by various other names. For example, Gávdhos appears in the biblical narrative of Apostle Paul’s trip to Rome as Klauda, ​​or Cauda (Καῦδα). The island was also described as Cauda by the Roman geographer Pomponius Mela and as Gaudos by Plinius. Ptolemy spoke of Claudos (Κλαῦδος). The island was also known as Gozzo. The Venetian named the island Gotzo, perhaps imitating the Maltese island of Gozo. From the 17th to the 19th century, the island became known as Gondzo. The Turkish name of Gondzo was Bougadoz.

After the brief and rather inglorious interlude between the First and Second World Wars, where it was the „place of exile“, this little island was regarded as the last refuge for individual tourists and (old) „hippies“ who were looking for peace. In recent years, attempts have been made to pay more and more tribute to tourism, but often without purpose and thought, and thus rather unsuccessful – remoteness and water scarcity also play their part.

There are only a few natural fresh water sources, for example at Korfos, Agios Pavlos and Agios Georgios behind the cedar juniper forest of „Kedres“. In recent times, attempts have been made to cover the increasing water demand through drilling, because the island is rich in groundwater.

Most of the water used for agriculture, however, is still rainwater collected in cisterns, but this is no longer sufficient for agriculture on a larger scale and only serves for some private support. Grain cultivation or cattle breeding, which was formerly done, is at best still available today for personal use on a small scale.

Richness of species on Gavdos

Among the 457 fern and seed plants found so far on Gavdos are the 10 centimeters large Gavdos rabbit ear (Bupleurum gaudianum) and the „Beautiful Water Star“ (Callitriche pulchra) that grows in North Africa and has an outpost on Gavdos on the north side of the Mediterranean.

Compared to other Greek islands or even large parts of Crete, Gavdos appears very green, the island is largely forested. The Calabrian pine (Pinus brutia) predominates, alongside with the Phoenician juniper (Juniperus phoenicea) and, mostly near the coast, the large-fruited juniper (Juniperus macrocarpa). This species also known as “sea juniper” forms impressive tree shapes up to twelve meters high. It is also found near the coast in Crete. The tree-covered sand dunes of Gavdos offer a fascinating sight. The southernmost tree in Europe near Cape Tripiti also belongs to this species.

The strikingly strong tree growth has only developed in the past 150 years. Contemporary witnesses in the 19th century describe Gavdos as extremely bald with only a few trees. Almost all of Gavdos is terraced, a sign that the land was cultivated land in times of increased settlement.

The head thyme (Thymbra capitata), which is typical of the Eastern Mediterranean flora, grows on the sandy beaches in a growth form adapted to the sand drifts with significantly longer branches.

The “capital” of the island is Kastri, located in the interior of the island and permanently inhabited by around 40 people. On the northeast coast there is the island’s ferry port – Karaves – here also the ferries to and from Paleochora and Chora Sfakion arrive and depart several times a week. That’s why here are most of the tavernas and „rent rooms“ of the island. Well drilling has made it possible to rent rooms with running water in the evening, generators produce electricity.

The southernmost town of the island (and therefore Europe) is the village of Vatsiana – located on a plateau and the starting point for many hikes to Cape Tripiti, the truly southernmost point in Europe.

Exactly here stands the probably largest chair in Europe, on which every Crete vacationer should have been sitting at least once. 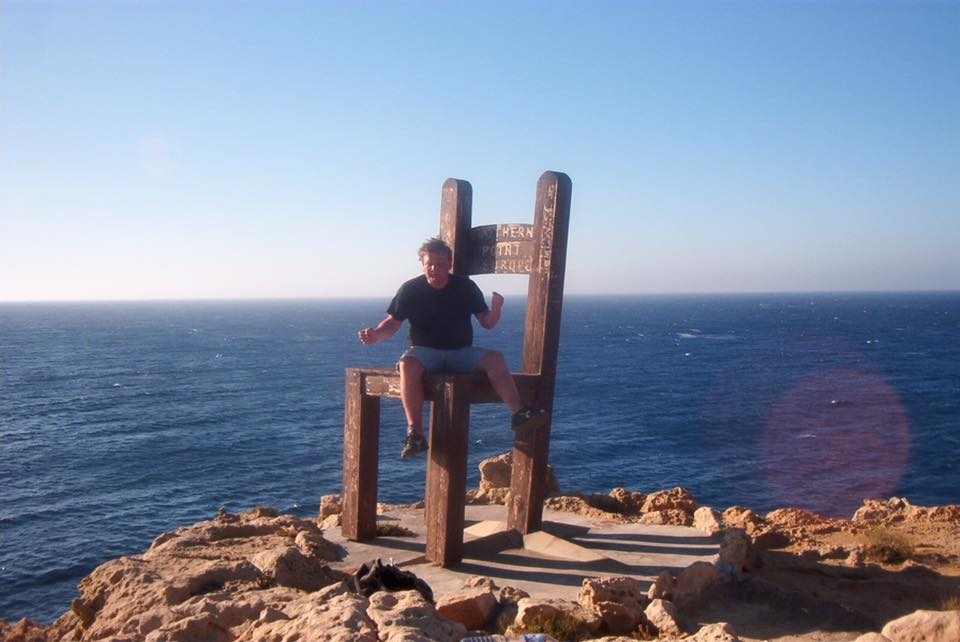 Friend Arno S. from D. on his favorite chair.

Since the end of the 70s, Gavdos has been the destination of backpackers who stayed on the island for months and lived on the beaches of Sarakiniko, Korfos or Agios Ioannis. More and more provisional, later „real“ tavernas were created, which served as supply and meeting points. Gavdos was not suitable for on-schedule travelers due to the risk of not getting a suitable return trip because of possible bad weather conditions.

The significant improvement in ship connections, especially to Paleochora and Chora Sfakion, has changed the situation, the wave-prone breakwater has been replaced, the ships are larger and more seaworthy, and ships go to Crete 3-4 days a week during the season. But even if the ship connections have become better and more frequent, the weather is still the weather. So it can happen that a 2-3 day trip easily turns into a 14-day forced stay, because wind and waves simply do not allow the crossing.

Consequently, there are occasional supply bottlenecks, but the Gavdiotes, who are always well prepared, are flexible and know how improvise.

Gavdos is a wonderful travel destination for individualists, old, new, ex and never-not-hippies who are neither attracted to luxury nor “normality” and bring a lot of time with them.