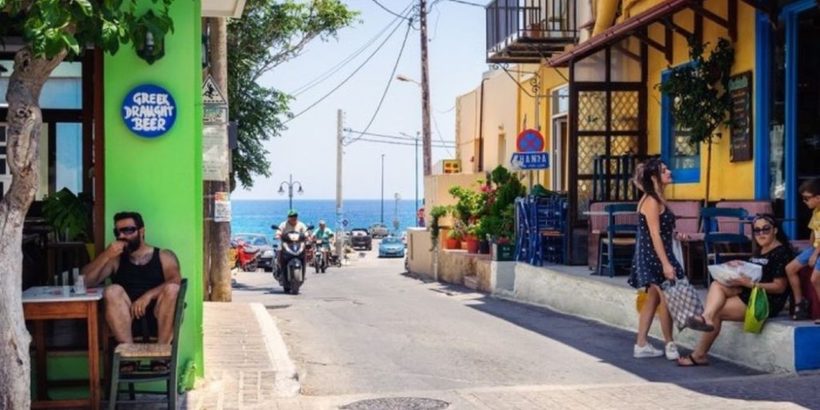 By our friend Tommy Kunert. Translation by Edit Engelmann.

Paleochora is a place in the west of the southern coast of Crete. The best way to get there is to fly to Chania. From there you drive past the city on the national road towards Kissamos and leave it behind Maleme at the exit of Paleochora.

It is almost 73 kilometers away from the city of Chania. To be on the safe side, plan a little more than a one hour’s drive. There are regular bus connections from the Chania bus station, if you do not want to take a rental car during your holiday on Crete.

Like so many other places on the south coast, Paleochara has existed for several centuries.

According to tradition, it was destroyed at least three times throughout the years. The ruins of a Venetian fortress are overlooking the old town – “Selinou Castle” – telling about stormy times. The fortress’s ruins are freely accessible. And since Paleochora is on a peninsula, the castle grounds provide a fantastic panoramic view over the entire town, the town’s beaches and the new harbor

Today, around 1,800 people live in Paleochora all year round. Tourists have been coming to Paleochora since the times of the hippies. They loved the calm, hospitable nature of the residents, the quiet, empty beaches and the generally cozy atmosphere of their “Pale”. Contrary to almost all places on the north coast, the inhabitants did not begin to rely on regular tourist flows, which is why the place has retained much of its charm.

There is no mass tourism.

The only tourist buses in the area drive to the “Samaria Gorge” and are already turning around a few hundred meters above the village. Only individual travelers reside in the meanwhile quite numerous hotels and private pensions.

I noticed when walking the streets, that locals dealing with tourists know an unbelieveable number of foreigners who obviously regularly come here since many years: Everywhere a warm “Jassu”, they are greeted by name and often also hugged …

Though Paleochora is a quite remote location, it is very practical that you can get everything you need during your vacation directly on site: Additionally to  a variety of classic taverns and cozy kafenionas, there are also two pizzerias (one of them with a real stone oven), some small and two larger mini markets, four pharmacies, three bakers, three bank branches, each with their own ATM  terminal, at least two “China” junk shops, various souvenir shops, a few jewelry shops and a post office. The town’s largest travel agency offers practically everything from rental cars, over mopeds and mountain bikes to guided hikes.

By the way, no tavern owner in Paleochora has ever come up with the nonsense idea of using Kamakis to pull customers in. I assume that every reasonably good restaurant can make ends meet with its regular customers.

You are never talked to from the side, nor pressed into anything or feel suspiciously watched. In comparison to the usual prices in Greece, Paleochora is at the lowest end of the price ranges. Of course, there are small differences in price and even bigger in quality. But a frappé for 1.50 euros, for example, is by no means a rarity here.

Speaking of “hiking”…: As practically everywhere on the south coast of Crete, you can also embark on extensive exploration tours. Take a boat tour to the dream beaches of Elafonissi 12 kms away – the so-called “Cretan Maldives”! Or discover some of the numerous gorges and countless caves in the foothills of “Lefka Ori” – the “white mountains”!

I personally enjoyed the following tour: A friend drove us up to Anidri. Here, behind the ruins of the old olive mill and right at the entrance to the monastery, a mountain path begins. This leads with incredible views through the wonderful wild nature, past the ruins of at least two old settlements to Anidri, and then halfway down to the coast. Here the „old school“ was converted into a simple tavern by a German who moved here.

After a pause you follow the sporadically existing, hand-painted signs to the Anidri Gorge which leads down to the coast. Arrived neatly sweating at the beach, it’s twice as much fun throwing yourself into the waves!

Turning right, you will get back to Paleochora following the gravel of the coastal path. In a normal physical condition, sturdy shoes and sufficient water in your luggage, this tour can also be mastered by children without any problems. Including all stops (breaks, eating, three times bathing) we made it in a good six hours.

And exactly the same people you met somewhere in the mountains during the day will run into you in the evening greeting on the plateia. Or they sit at the neighboring table in the tavern, so that you can immediately exchange experiences and collect suggestions for the next trip. This cozy, personal atmosphere is the main reason for my decision to introduce my customers to this, still idyllic, Cretan place.

Who would go on a vacation to Crete without enjoying an extensive beach life? And that’s exactly what you can do in Paleochora as well: The town itself has three beaches.

The beach on the left (when looking towards the fort) is a pure stone beach. Due to the large, round stones, you can only get into the water on all fours, but when snorkeling you will be rewarded with extremely clear water, lots of colorful fish and hordes of shy, black-orange crabs.

Also on the left, just a little further ahead – shortly before the new port, built with a lot of EU funds and now hardly used, at the tip of the peninsula there is still a small pebble bay. The local cafe has put up umbrellas here.

The beach on the right side is a few hundred meters long and encloses a neatly wide sandy bay. Snorkeling is only half as much fun here, but loungers and parasols are rented out, there are some beach cafes and your children can build sand castles as they please.

And if these three beaches should ever get boring, there are at least 16 beaches in total in the region around the village.